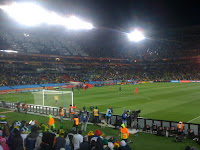 Was the game between Brazil and North Korea the coldest ever in World Cup history? Maybe it's because mentally I'm still in UK June mode, but I've never been as cold at a match before. And with World Cups usually during the summer, this had to be a first.

We got a lift on a private bus from some people we met at a hotel and they kept us well watered with sherry, red wine and beer. But even the alcohol blanket wasn't enough. I didn't even want a snack at half time but I was happier in a queue than I've ever been before, robbing people's body heat left right and centre.

Radio football commentary in South Africa is different. We've been tuned into Radio 2000 on our long car journeys and the quirky comments, mispronounced names and eccentric accents have made the traffic more bearable.

The funniest moments come when there is a goal-scoring chance. The name of the player is shouted out with the last syllable stretched and stretched. In England this would mean a goal. Here, it is followed by a silence, more silence, then a description of what happened. "Just wide", "just over", "just stopped" , "just blocked". A shot has not gone well wide in the five games we've listened to so far.