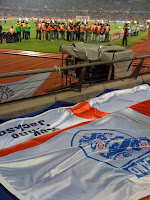 Travelling to football is not something we're strangers to but the three-hour drive from Johannesburg to Rustenburg on Saturday was something else. First the townships, then the sparse and dry countryside, then the mountains lit by a fiery fading orange sun.

By the time the stadium appeared amongst a cold smoky mist it didn't seem real. Is that why the England fans were so quiet, not quite believing that they were watching a World Cup game in a stadium built by an African tribe? Or could they not be bothered to compete with the vuvuzelas? Or is there a belief that the team must impress first before getting the full backing of the fans who have paid so much to get here?

The goal helped but almost immediately afterwards a nervousness settled in. There should be more of a party in Cape Town, with a layout more familiar to European football fans. The distance between the station and the stadium is manageable by foot and the walk takes you past plenty of bars. Plus the stadium is much bigger. There's rumours it could snow though - how would England fans react to that?