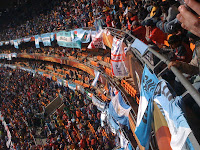 When did England fans start their love affair with the cross of St George flag? Hazy memories of the 1990 World Cup suggest the Union Jack was more in vogue then. The red cross has gained in popularity despite the links with red wing political groups. Euro 1996 seemed to be a turning point, and since then more and more fans opt for a flag to mark their presence when following abroad.

This is not restricted to stadiums, anywhere will do. Usually within walking distance of a public square and/or a licensed premise. Or on your house if you're the prime mininster. Small flags on cars have multiplied over the last three major tournaments, despite the supposed safety risks, and in South Africa people also have flags to cover their wing mirrors.

Flags we've seen in SA proudly declare 'no surrender', 'we still believe' or simply 'on tour'. The words usually run across the middle but letters populate the full surface for those more chatty. Club loyalties are not forgotten, with emblems sometimes finding their way into one of the corners.

Other countries are either not as keen or go for a different approach. The Brazil matches we went to were flag free, the French only dabbled with the odd tricolores. South Korea unrolled (then quickly and neatly re-rolled) two huge flags, both covering a full tier, and then each fan had their own small one. They were even giving them out.

Argentina definitely seem to have caught bug. Their game against South Korea saw flags aplenty, many more elaborate than we'd seen before. They are usually longer and flatter than the St George variety, better fitting the sections between the tiers of the stadium. They were also more political judging by the amount confiscated by the police. Someone can't have liked our huge England flag as it was stolen before we had time to get to it at the end of the game.

A funny sight on approaching grounds here: a man selling vuvuzelas (and their 140-decibel blasts) stood within a few metres of a man selling ear plugs.