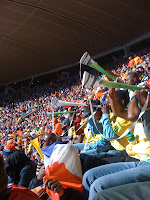 And dance they did. We'd felt the World Cup glow since landing, it was the opening day and everyone was so proud - South African flags in cars, on cars, out of cars, on the back of car mirrors. But then we saw them dance. And suddenly you've taken a great hit of World Cup fever and you're buzzing. It's bitten you hard. You want games you want chants you want laughs, you want football. Football, football, football.

The World Cup started not when we went to our first game but when we squeezed into a heaving bar of mainly black locals singing shosholoza and moving their bodies in unison. Like a slow wave moving towards the small TV screen, then back, then forwards again. Arms imitating the movement in the air.

And then it stopped (for a few minutes). Mexico had dared equalise, sending a chilling, rude reminder that this was not just the day Africa greeted the world, it was also the beginning of a month long battle of the biggest stars in the biggest sport playing on the biggest stage.

And so it begins.

Football is not the top sport for White South Africa. Our train into the centre of Cape Town from the wealthy Century City, with its brick business park and shiny shopping centres, was packed even though their team was battling it out in the tournament's opener as we sat there.

Home team is a loose definition. Yes they want Bafana Bafana to win, but they have no hesitation in dressing up in French gear despite the bleu-blanc-rouge being their biggest Group A rival. People seemed keen to talk about rugby, and they won't be backing the opposition when the two teams meet today.

But it's not just France they support, it's Italy, Spain, Brazil and, of course, England. The St George's flag is everywhere. The Premier League's colonisation of the world's football fans has turned this part of the world into fans of Rooney and co. Do they know what they're letting themselves in for?