A trek usually culminates in a feeling of exhausted achievement and, if you’re lucky, some beautiful views. But what greets you at the end of the five-hour ascent through Parque Nacional Laguna del Laja to Puerto Viejo is just the beginning of another, more dramatic, story.

Rock faces are sprinkled with marble plaques, fresh flowers recently placed beneath each one, and the familiar Chilean phrase “siempre in nuestro corazon” is graffitied over and over at the side of the path. A closer look reveals something that takes your breath away: each name is that of a fallen soldier, and each died at only 18 or 19. 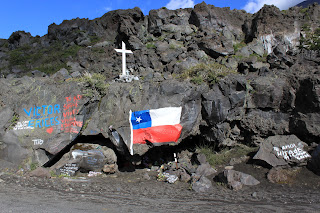 The young men were covering the 28km between military bases in Los Barros and Puerto Nuevo in May 2005. But as they came closer to reaching their goal, they were hit by a terrifying white-out. The fast-dropping temperatures shook them to the core, but it was perhaps more to do with the unique surroundings that 45 of them lost their lives.

Although the nearby Volcan Antuco has not erupted for 300 years, there is still an absolute absence of vegetation around its base and therefore a scarcity of reference points. Even without snow, there are no trees to guide visitors, only rough roads dug through the porous rock. With deep snow evening out the landscape, the storm reduced vision to a vast, flat blindness. Spun into disastrous disorientation, they froze to death, some losing their lives while they still hugged each other. Many of them had only started their conscription three months earlier. 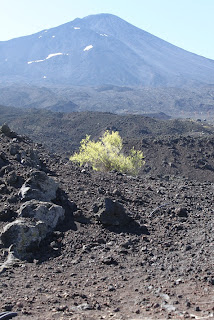 As we walked along their path, the grimmest reality emerged: many of them died within sight of their destination. We found the last tribute in the entrance to the military refugio – one man had lost his battle with life within touching distance of safety. Officers trapped inside peered helplessly out of the window, counting those still missing.

When trying to make sense of such a tale – it was the Chilean Army’s second largest loss of life outside of battle – one obvious question rattles around your head: ‘why?’ And that’s what I asked a current member of the Chilean army, who I had met at the start of the ascent and shared most of the journey with. He was closely linked to the incident – he belongs to the same regiment as the fallen soldiers and one of his closest friends survived the tragic journey.

Although he was technically trekking for pleasure, my travel companion for the day was carrying 40km on his back and had a gruelling schedule ahead of him. The next day he would tackle the peak of the 2900m volcano, and, after some sleep, conquer Sierra Veluda at 3,585m. Just a normal day’s work, he joked.

He explained that, although the country is not currently in conflict, it relied on an army highly specialised in mountaineering to defend its vast Andean borders. Even fairly stable relations with neighbours did not mean Chile could remain passive, he added, and explained that a group of Bolivian military had been sent packing recently after attempting an Andean intrusion.

An army general at the time of the tragedy was criticised for conducting such a difficult exercise, and I was surprised to hear that the very same drill continues to be carried out.