In most heavy-duty, large-scale, labour-intensive, poorly-paid work, the bad guy is usually the boss. The man is possession of the means of production. The machine. What is so heart-wrenching about the soul-destroying, lung-destroying work in the mines of Potosi is that there is no bad guy. There is no entity you can point at and say: you can't do this to these people. 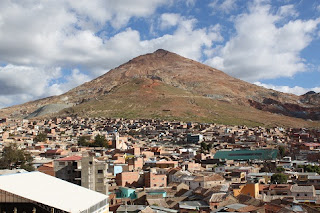 Eight million people have lost their lives in the Potosi mines over the last 500 years. But that's just a number, and one so huge that no one can really get their head around it. Every day people sacrifice their lives on two levels: they risk being trapped as the tunnels collapse from poorly-planned dynamite explosions aimed at freeing a few low-value minerals. And, secondly, they crawl, scratch and snatch their way to an early grave, their lungs filling with poisonous gas and dust in their coffin-like workspace. And yet they work united. Not only in the face of these cruel, unreasonable dangers, but also in the face of intense competition. They work for a cooperative and yet each one's earning is yielded from the minerals they personally find and sell. Cerro Rico, a once fertile golden mountain, raped by generations, now only feeds its people scraps.

Some of the workers are boys, as young as 9, providing for their family as they fit being the main breadwinner in between classes of algebra and PE. The most famous, Basilio, who starred in The Devil's Miner is now 20 and, failing the aspirations he expressed when interviewed for the film six years ago, is still in the mines. His dreams of becoming a teacher unfulfilled, ten years now of hard labour. The film's many awards did not result in any rewards for his family. Oliver Baulch, in the book Viva South America!, tells the tale of how the film company did send Basilio a cheque for $30 – but it would cost $59 to cash it.

I walked up the mountain last week, chewing coca leaves to keep the altitude monsters at bay, in the hope of meeting Basilio's family, and found his mother. She said the family still had not been paid. Not only that, she seemed oblivious to the fact that hostels and bars throughout the city were airing their story on an almost daily basis to the swarms of new backpackers. Local businesses entertaining the Westerners at the expense of one of their own, it seems.

A staff member in my own hostel almost laughed when I asked if the 5 bolivianos (50p) we had paid for our viewing pleasure would go to the mining families. A long email to her manager on the topic was met by the following: “Many thanks for your message, we are planning what we can do with your opinion.”

When we were walking up the mountain towards a statue of Christ that overlooks the city, we felt the earth move. One, two, three, four... eight dynamite explosions, one after the other. It felt like the Cerro's fragile chest was pounding under our feet. We quickly moved to a safer path to get away from the dangerous mines - we're lucky we had the option.
Posted by Jack at 00:52