High Five for the soul

When you spend hours on end with the soul-destroying tasks of going through a pile of questionnaires and tallying up the ticks next to the 80 questions they each contain, keeping the mind busy is vital.

BBC Radio 5 Live have done enough to hurt me over the years – making it clear how dominant Everton were over Spurs in the 1995 FA Cup semi-final, producing a series of irritatingly memorable jingles, not taking me on as work experience when I could see the sharp blade of the recession swinging in my direction – but today they came up trumps.First up was TV critics raving about a La La Land, a BBC3-bound Sacha Baron Cohen style spoof interview programme. But nicer.
The writer and star Marc Wooton said he couldn't bring himself to make fun of his interviewees 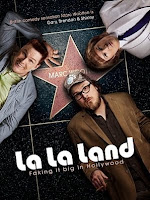 without coming clean about being a comedian. This wouldn't get in the way of him being funny though, oh no.A clip from the show had Wooton as Brendal Allen, an aspiring 'documentary auteur' speaking to an old school film-maker about a great new idea – rather than filming sharks from above, why not use under-water cameras to see what they actually do? After saying seven times that this concept was not new, the old guy walked out.
Next on the line-up was Patrick Regan of the youth charity XLP who met David Cameron today. Regan spoke about how he spent time with young people who went to school in bullet-proof vests. He spoke about how it costs £165,000 a year to keep a young person in a secure unit. And he spoke about the cost of youth unemployment. He spoke positively but realistically, explaining how investment in education and youth services can save money down the line.

From the serious to the more trivial, next, with an inquisitive finger pointed in the direction of 'fullsome' and 'chronic' – two words we use every day, mostly incorrectly. Chronic means long-term rather than serious, fullsome means abundant, but in a bad way. A smart-arse listener suggested this segment of the show should be known as 'Catachresis Corner' as catachresis is the term for misuse of a word. An ever smarter-arse listener said dictionaries are wrong – we decide what a word means. On that note there was nowhere for this segment of the show to go really.

I tuned out slightly as talk turned to bin men earning £80k, something about the richest football club in the world running out of goalkeepers, and Nick Clegg talking about hung parliaments. Syntax came under the spotlight again as John Pienaar concluded Clegg either lied to Nicky Campbell or lied to Andrew Marr. Even Pienaar was confused, calling the Lib Dem leader Nicky.

My last morsel of attention was spent on meerkatmatch.com, a site set up on behalf of a three-year meerkat looking for love. It worked, too, and no surprise with a profile like this:

I am a fun loving 3 year old Meerkat who has recently moved to Twinlakes Family Theme Park in Melton Mowbray, Leicestershire from sunny Devon.

At this stage I thought it was probably best to turn over to Radio 1 for a bit.